Model and Brand Ambassador  for Elizabeth Arden in Africa, Adeola Ariyo reflects on growth and change in 2014.

Her schedule shouldn’t allow for a gingerbread latte and a chat, but Adeola is here, sinking gracefully onto a chair after racing from a photo shoot. “This year has been extremely busy – busier actually, than last year. This year I didn’t just do things that involve me being a model; I did things as Adeola the person.

“Last year was all about work, work, work… this year was work, Elizabeth Arden, charities, and a whole lot of traveling.” She’s ready for 2014 to wind down, mostly so she can calm the whirlwind raised in her usually spotless apartment whenever she rushes onto a flight, but also so she can take stock. Although she was named African brand ambassador for beauty giant Elizabeth Arden in February, it hasn’t quite sunk in yet. “In a way, it’s a good thing, because some people, when these things sink in, it starts to go to their head… I don’t want it to sink in.” The much- celebrated role has brought on the year’s biggest changes. “I’ve grown a lot… I see my age in me when I am in my brand ambassador role.” Her 16 years as a model have given her the self-confidence and intelligence required for the job. Any earlier, and she might not have been ready for it: “I was a rascal. I can’t imagine me being a brand ambassador as a rascal.”

Over time, too much intersection between her roles complicates them – separation brings sanity to a mad existence. “I try to compartmentalise things, so it’s Adeola the model, Adeola the brand ambassador, and Adeola the person.” She laughs about how much that person has changed since Face of Africa. “I’ve learned how to look after myself… now that I have all this skin care knowledge I wish I had started younger. “I said to myself, people pay to get these things done [hair and make- up]… instead of just sitting there, earphones in, on my phone, I’m going to pay attention, because I’m getting a free tutorial. I knew that in the future I wanted to give guidance to younger models – I needed to be hands on.” Her understanding of the job is broad, deep, and ripe for plucking. “If I have knowledge about certain things, I will spread it to everyone who cares to hear.” 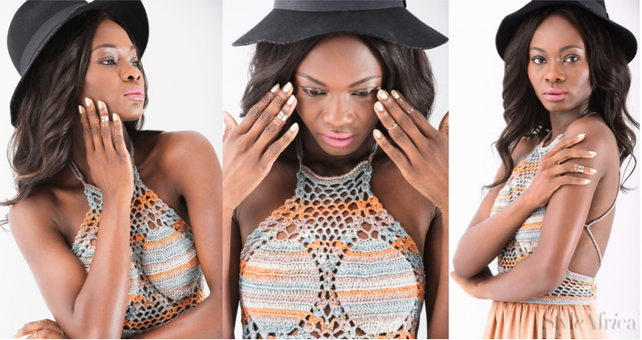 Change has been very good for Adeola, but the cheeky 13-year-old rookie is still there, tempting her to run through a fountain between castings on a hot day. “That’s the kid in me. “My brother is 14, my sister is 19, I’m 29, but when I go home, you wouldn’t even know who is the eldest……. I still watch Tom & Jerry and Mr. Bean.”

Adeola will be featured on our youtube channel StyleAfricaLoves for the summer season. So make sure you’re following us to get these exclusive interviews and stand a chance to win loads of fab prizes!